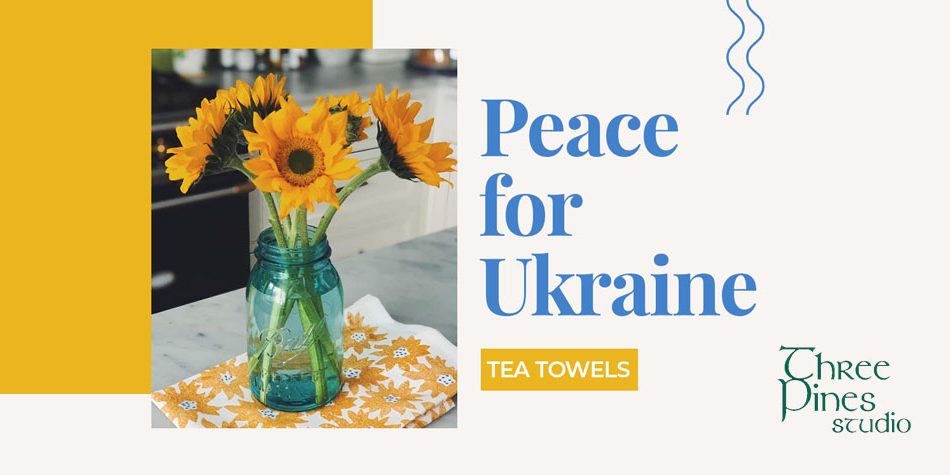 I’ve been working with Three Pines Studio and Gallery for almost a year now managing their Facebook and Instagram channels, and Google Business Profile.

Our most recent promotion has been for Joann Condino’s Peace for Ukraine tea towels.

Joann is the owner of Three Pines Studio and Gallery and was distraught over the devastation in Ukraine during the Russian invasion.

“I had to do something,” said Joann, “and the only thing I know how to do is create designs on fabric.”

So she created two new designs of linen tea towels featuring symbols of the Ukraine and is donating 50% of sales to World Central Kitchen.

Tea Towels for Ukraine Sold Out in Three Days!

Joann had no idea the demand would be so high for her tea towels.

In fact, she sold out of her first run in three days!

She sold more tea towels in a week than she sells all year.

It Takes a Village. Cross Village.

Due to demand from the success of online promotions and a loyal network of friends and followers, Joann’s fundraiser became a community effort.

Volunteers and area seamstresses have been helping with production, packaging, and shipping.

Promoting on social media and circulating a press release for wider promotion has filled my heart with joy. The response has been overwhelming and sales remain steady. Joann’s phone is pinging constantly with new tea towel sales.

If you’re looking for a way to help with Ukraine relief, please purchase a beautiful tea towel online.

You’ll receive a lovely keepsake made by hand locally, and 50% of your purchase will help feed hungry Ukrainians.

Marcie's Tuesday Museday: Boost Your Brand With In

What's the Buzz? Colors in Marketing! Color has po

What's the Buzz? Every business in northern Michig

Should You Buy Followers on Instagram? No no no! N